Platform: the celebrated film directors Andrew Lau and Alan Mak who appeared in the advertisement were invited to the launch press conference to boost media interest

Results: the event was covered by all major newspapers and financial magazines across the region 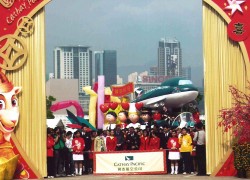